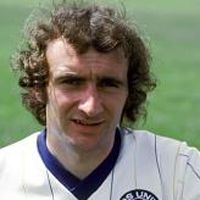 On the occasion of former United stalwart Kevin Hird‘s 59th birthday, there’s an opportunity not to be missed – to look back on a memorable win over this evening’s opponents Brighton & Hove Albion.  This victory gave Leeds some short-lived hope of avoiding relegation from the First Division, way back in 1982.  This was a match notable also for the ferocious atmosphere generated by a relatively small crowd of 19,831.  The attendances at Elland Road had dwindled to little more than the hard-core of true fanatics in what would turn out to be a disastrous season – but on days like this, the reduced numbers bizarrely added to the volume and intensity of support; serving only to magnify the pandemonium and chaos when we scored and won.

So it was that one of the best atmospheres ever at Elland Road was reserved for the club’s last top-flight home match for over eight years, as relegation was just a few days away for Allan Clarke‘s men, ending a First Division stint that went back to 1963.  But for those few days, it seemed that escape from the drop was possible, as goals from Gary Hamson – a spectacular thirty-yarder – and Kevin “Jasper” Hird, so nicknamed for his uncanny resemblance to Brummie comic Jasper Carrott, saw United come from behind to defeat Brighton.  Elland Road rocked, with a noisy mixture of hope and relief.  The hope was in vain as it turned out, but this match, this nail-biting comeback, was a fitting swan-song for Leeds who, when they eventually came back, showed that they meant business under Wilko. Watch below as an era ends.