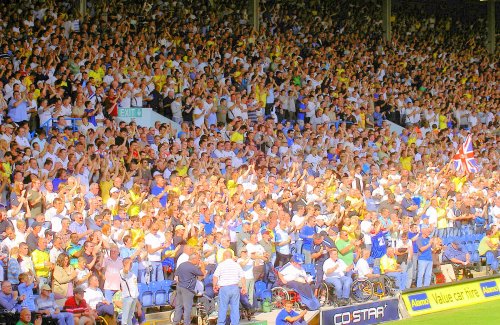 An unfamiliar word threatens to gain some currency in the English language: “supersortium“.  As words go, it’s a bit of an ugly duckling.  There are a few too many syllables for the liking of certain football supporters, particularly those of a Barnsley or Millwall persuasion – and it doesn’t exactly trip off the tongue.  But, for Leeds United fans, the one remaining tangible asset of a failing football club – this strange word may just herald the dawn of a whole new era at Elland Road.  And boy, oh boy – do we ever need one of those.

The supersortium is, of course, really just a common or garden consortium – only bigger.  In the case of Leeds United, it’s what you get when you take one hopeful bunch of guys with some nice ideas but a charming vagueness as to how much hard cash they have, and add a likeable lunatic of an Italian with family wealth of well into ten figures and a comfortable annual income not unadjacent to €200m.  The revelation that Mike Farnan’s Together Leeds Group have been enjoying “very positive” talks with Massimo Cellino has taken some of the attention away from the fact that the Italian’s appeal verdict is set to be revealed very shortly.

If the appeal is successful, then Cellino is presumably able to go ahead with Plan A and sort Leeds United out in his own unique fashion.  If he fails, though, he will surely be considering all options.  It may even be that a joint venture, with co-operation between Cellino and Together Leeds, is now the preferred option going forward.  From everything that we know – which is doubtless but a small fraction of the true facts – such a combined operation could be a very solid foundation for the re-launch of a healthier and happier United.

Events over the past few days – notably a highly irregular interview with an extremely tired and emotional Massimo – have caused a radical shift in opinion among the Leeds United support.  Where before there had been some guarded support for the Italian, now we appear to be entering the territory of mass adulation – the kind of thing that spawns tribute t-shirts and causes quotes to be circulated with approval from the gems of wisdom uttered by Cellino and relayed without his knowledge to an admiring world. It’s been a sea-change in the climate of support out there,  and now those who wish for him to fail and begone are distinctly in the minority.

The wisdom of Cellino

This is understandable to anyone who has listened to Massimo’s tablets of wisdom, and his uninhibited style of self-expression. From that evidence, we appear to have on our hands a nutter in the best traditions of Leeds United; somebody who is a perfect fit for the club.  The fact is that, should it now turn out that we have to move on without Cellino, there will be many regrets among the Whites’ support.  And the feeling is unmistakably out there that, if this nutter, this profane retailer of fluent critique and homespun wisdom, were actually to end up approved – then a new United legend would be born from whom many memorable sound-bites would be forthcoming over what promises to be one hell of a ride ahead of us.

It may well be best all round if some sort of deal can be done between two parties that looked certain, until this latest remarkable development, to be engaged in a winner takes all tussle.  Co-operation between two parties, each with distinct and different benefits to bring to the table, looks likely to promise a brighter future for the football club we all love.  The presence of a maverick like Cellino could perhaps be tempered by the more considered approach of Farnon & Co.  Equally, the kind of institutional caution that characterises a group of sober-sides businessmen might well need the occasional spicing-up that an individual like the King of Corn could provide – not to mention the considerable factor of his immense wealth.

Thursday promises to be a landmark day, with the QC due to hand down his decision.  But, whichever way that goes, the whole matter is likely to take a few more twists and turns yet, before the future of Leeds United becomes at all clear.  The question still remains right now as to whether or not Leeds United actually has a feasible future.  For the time being, it is extremely encouraging to hear that there is dialogue between two supposedly competing parties, and that their agenda consists of the establishment of some security and future for Leeds, with the avoidance of administration an absolute priority. Surely, nobody with the interests of United at heart could possibly argue with the common sense and essential rightness of that.

Marching On Together.  It has a certain ring to it, don’t you think?