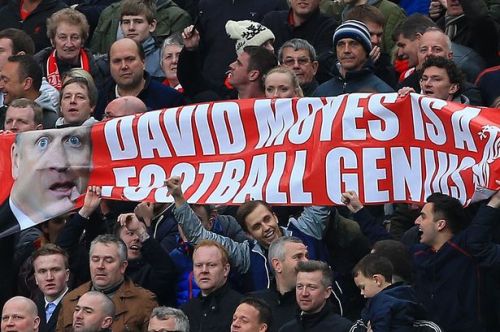 Moyes – a hero to not just Leeds fans

The Leeds United “Man of the Season” for 2013/14, David Moyes, certainly pulled all the stops out last time around as – virtually single-handed – he returned Man U to the mediocrity from which they should never have emerged, cheering up all real fans of the One True United in the process.

Sadly, his distinguished service to the game in general, and to those of an Elland Road persuasion in particular, earned him only the dubious reward of the sack. It’s a shame, especially as he was looking ready and able to build on his many unprecedented achievements at the Theatre of Hollow Myths. Now the fallen media favourites will set about recovery. True to their legendary youth policy and horror of buying success, they already seem committed to a £60m outlay on two players. Even though talent and success are withering and waning at the Trafford Redsox Ballpark, hypocrisy, that hardy annual of the Man U psyche, flourishes yet.

The fantastic job Moyes did at the Man U franchise, reducing the Pride of Devon to the laughing stock of the North West, was a masterpiece of destruction, fully appreciated by football lovers everywhere except Torquay, Milton Keynes and Barnsley. Every other Lancashire club helped themselves to six easy points from the so-called “Greatest Club in the World” and two feeble Cup exits at home had proper football fans everywhere splitting their sides laughing. For those with the good of the game at heart, the legend that is Moyes attained a status accorded normally only to heroes. How very apt.

Now it appears that Moyes is set to move on to the other target at the top of any Leeds fan’s hate list, and set about his work of annihilation at Galatasaray, a club who deserve to plummet just as precipitously as did Man U – if not more so.

No explanation is necessary for the hatred and contempt that Leeds United fans bear for that dreadful club and its animal fans.  The matter speaks for itself. Suffice it to say, as far as this blog is concerned, that failure and misery is the very least we wish them – and if last season’s exploits are anything to go by, then we might just have the very man in David Moyes to bring about those desirable outcomes.  However he managed to compass the demise of the Stretford Scum, more power to his elbow in employing exactly the same techniques to bring down the most disgusting club in the world to a well-deserved low point in their recent history.

Moyes, after all, has done it once; he can certainly do it again.  Even at Everton, where his performance supposedly fitted him for “elevation” to the hot-seat at the Theatre of Hollow Myths, his record was notably silverware-free.  In the wake of his departure for pastures more perilous, Everton – under the studiously technical guidance of Roberto Martinez – have enjoyed their best season for years, including six points from Man U as they finally fulfilled Moysie’s decade-long dream of finishing above their rivals from the red quarter of Manchester.

Good luck then, David Moyes, adopted hero of Leeds United fans as well as those of several other clubs, as you set forth to write a new and hopefully grimly disappointing chapter in the history of a club for whom despair and disappointment should be the norm.  We shall follow your progress with interest.  Closer to home, we’ll all be hoping that the legacy of your reign at Man U is not so easily undone, and that a repeat of last season’s hilarious cock-ups may be afforded us.  Really, as long-suffering Leeds fans, it’s the very least we deserve.

11 responses to “Can Leeds United Hero, Agent Moyes, Keep Up his Good Work?? – by Rob Atkinson”