The title of this blog is, of course, an exercise in the bleedin’ obvious. We all know only too well that there is a Damned United and a Blessed United. The media in this country drew that distinction long ago – the Damned shall be portrayed at all times in the harshest possible light, whilst for the Blessed, it shall be all soft focus, moonlight and roses, to a background of sweet music. So mote it be.

That’s what the media do, of course. They need their standby heroes and their polar opposite reliable villains; shades of grey are a little too subtle for their target audience. The public they’re catering to is, for the most part, easily led and uncritical. Thinking is not the occupation of choice for most of that vast audience out there so, OK – the papers and the broadcast media will do the thinking, and they’ll tell the people what to think.  The pity of it is that the people who actually run the game in this country go along so easily, all unprotesting, with the clichéd template used by those making the editorial decisions.

The vast difference in the treatment by the authorities of their perennial villains and their cherished angels has been illustrated yet again, in sharp focus, over recent weeks. At nasty, naughty Leeds United, they are 101 days into the reign of Massimo Cellino – or “Convicted Fraudster Massimo Cellino” as the gutter Red Tops like to refer to him. It’s been an interesting time at Elland Road, to say the least. Cellino has gone through the place like a dose of salts, employing the kind of hands-on approach that would put even a full-contact masseur to shame. Dead wood has been cut out, there has been a detailed inventory of the club at all levels, malign influences have been neutralised – even the secret cameras in the bogs and the boardroom have been binned. Now, the new Don of Elland Road is embarking upon a player recruitment campaign in the wake of mugging Fulham FC out of £11 million for a flash-in-the-pan, disinterested and somewhat stroppy Scottish striker.

Many are now saying that Signor Cellino is the best thing to hit LS11 in several decades – yet this is the man the Football League were determined to bar from any involvement in Leeds United, preferring to leave our ailing club to the tender mercies of GFH Capital, whose erstwhile football CEO now languishes in a Dubai jail.  The League did their level best to hound Cellino from these shores, even as they turned a blind eye and cocked a deaf ear to some fairly horrendous wrongdoings elsewhere.  So Blackpool’s rapist director was left unmolested, and Birmingham’s jailed money-launderer was spared any undue attention – but Cellino was pursued with unseemly vigour by the spiteful old men of Preston, Lancashire. Fortunately, the Italian’s legal team knew far too much for the superannuated dolts of the League and he was able to take charge of a football club that sorely needed him, with results we are now beginning to see. But official resentment over that judicial defeat still simmers – and they’ll be out to get Big Mass, if they possibly can.

Meanwhile, over there on the wrong side of the Pennines, an even hotter resentment curdles still over the surprisingly stiff start to last season’s League programme for football’s darlings The Pride of Devon, the one and only Mighty Manchester United themselves.  As I wrote on October 6th last, Man U were positively seething about the relatively difficult early fixtures and – naturally – they complained loud and long, which is what they always do. My satirical spin on the matter was that the League would – equally naturally – lean over backwards to redress the balance for football’s most petulant club. Well, it turned out that I was actually a bit of a prophet, even though I thought I was merely poking fun.

This year’s opening fixtures for the Pride of Devon, you see, are a model of discreet gentleness, an opening six games designed to give Wapping’s Wondermen a maximum 18 out of 18 points fillip to get their season off to just the right start.  Man U face all three promoted teams in that initial phase of the season – Burnley, QPR and Leicester, together with Sunderland, West Ham, and Swansea – not one game against a team finishing in the top half last season. Now, what are the odds on that?? Is there a mathematician in the house??

Clearly, last season’s awkward start still rankles with somebody from the Theatre of Hollow Myths, and it has been made expressly clear that such a thing is not to happen again. True to form, the game’s so-called “ruling body” has rolled over onto its back, legs akimbo, and begged those nice people at Man U to have their way with it. There’s the standard stench of hypocrisy and favouritism about the whole thing, and absolutely no dignity, decency or integrity at all.  Plus ça change…

The fact is, of course, that for all this breast-beating about how they get the kid-glove treatment, whilst we get the spiky knuckledusters – we probably wouldn’t want it any other way.  I mean – really – would we?  Do you fancy supporting a club that gets everything handed to them on a plate? A club that is open to accusations of crass ineptitude in any season where they don’t win absolutely everything? Not for me, thanks.

By the same token, there’s a kind of perverse satisfaction in supporting a team hated by the country’s media – swill-gobbling hacks to a man that they are – as well as by the supposed great and good in the corridors of power. For goodness sake, just look at these people – they quite literally do not have a clue. Would we even want the support and succour of such a bunch of muppets? I would respectfully submit: no, we most certainly would not. Leave that kind of patronage to Man U and their global throng of armchair supporters, their vast markets of tat-buying dunderheads from Torquay to Singapore. They know no better, they are not equipped to make judgements as to what is and what is not desirable in terms of who their “friends” are – however highly-placed.

No – this blog is quite clear in its own only slightly bitter and cynical mind; Life, Leeds United, the Universe & Everything would rather see our heroes in white tread the hard road than have everything smoothed over and made easy. It’s a question of self-respect and good taste, don’t you know. The only important thing is that these people should not think we’re sitting here all content, the wool pulled firmly over our eyes. We are not. We know exactly what is going on and, even if the Pride of Devon’s easy start and expected 18-point haul from their opening six games should gain them another unmerited title – we will know how it’s been accomplished. We’ll be watching the referees’ performances with our usual beady eye and, when we’re not fuming over the injustices perpetrated upon the Damned United, we’ll be pointing an accusing finger at every dodgy penalty and offside goal enjoyed by the despicable Chosen Ones.

So just think on. We’re onto you, and we know what you’re all about there, in your ivory towers. Watch it, that’s all. Just – watch it. 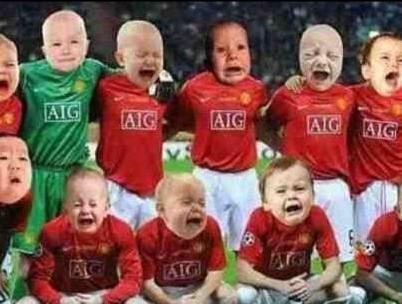