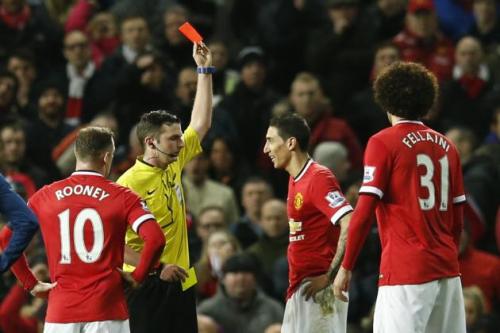 It’s an enlightened football club that looks after its players after some major trauma or shock; attending to their emotional well-being instead of merely training them, like sporting automatons, to go out there and just perform, match after match. So we here at Life, Leeds United, the Universe & Everything are particularly impressed to hear that Man United, long recognised by themselves and the population of Devon and Cornwall as The Greatest Club in the World™, are to arrange counselling for their deeply traumatised players in the wake of Michael Oliver‘s shockingly honest performance during Monday’s FA Cup 6th round home defeat to Arsenal.

The counselling will take the form of gentle reassurance for those who are having doubts about their ability to dive convincingly, whilst Angel di Maria will receive special one-to-one therapy designed to restore his confidence that he can push the referee if he sees fit and do pretty much as he likes, as per his rights as a Man U player and the long-standing traditions of the club.

Some of the younger players are haunted by doubts about their ability to emulate former stars such as Cristiano Ronaldo and Mark Hughes, both of whom are legendary for spending a large percentage of their playing hours for the Pride of Devon on their respective arses, having performed a perfect swallow dive and double roll, ending up in a position of abject supplication, arms outspread in entreaty, mouth agape, outraged eyes fixed firmly on the referee.

This remains the officially approved method, according to a Theatre of Hollow Myths spokesman, although there is still scope for the “drop dead” method by way of variety, also known as “the sniper in the stand“. But, our contact informed us, the younger ones are feeling rather less comfortable with this approach in the wake of Oliver’s bizarrely unbiased showing on Monday.

“They’re prey to conflicting emotions,” said the Devon official. “Don’t get me wrong, they want to dive – it’s what they’ve been trained for, after all. But some of them are worried that their technique isn’t up there with legends like Ronaldo, Hughes and even current practitioner Ashley Young. Some of these young lads are harbouring thoughts of trying to beat a man and get a shot in, instead of letting their dramatic training do its job and going down like a good’un. Michael Oliver has done a lot of damage here, and all we can do is provide whatever support and reassurance is needed.”

Worse still is the fact that even senior player appear to be having the same doubts and insecurities, something that is reflected in the fact that The Most Fantastic Club in the Entire Universe™ are struggling even to qualify via the Champions League back door. Ashley Young is a case in point. “Yes,” our man admitted, “Youngy is having a really bad time lately. He’s just not playing his natural game. Twice in recent matches, he’s worked himself space inside the area – and then he’s gone and had a shot, bless him, when all his natural instincts as well as his training tell him to hit the turf and scream for a penno. So, instead of helping the team, he’s inevitably scuffing one wide, which looks really poor and, trust me, the boy’s as sick as a parrot. But we’re hoping to help Ashley too, with this restorative therapy programme. It’s what this great club is all about.”

Life, Leeds United, the Universe & Everything was unable to get a reaction from Michael Oliver himself. When we asked his refereeing mentor for a quote, we were told that Michael is currently incommunicado “until the fuss has died down”. It is understood that the “far too honest for his own good” referee will be spending the interim period relaxing in a place where he is unlikely to encounter too many irate Pride of Devon fans, at least until such time as that self-righteous and petulant anger has dissipated. He will therefore be sojourning “somewhere on the Pacific Ocean sea-bed” for the next five years.

Man United themselves have not commented at length on the Michael Oliver controversy, beyond a brief statement to the effect that “This is what happens when we have a ref who wants to make some sort of “fairness” name for himself. We’ll be demanding a Manc ref in the future, it worked up at Newcastle as you all saw, and it’s really for the best all round.”

Adnan Januzaj, 14, who now has as many yellow cards for diving as he does goals in his Man U career, is thought to be the 45th “next George Best”.