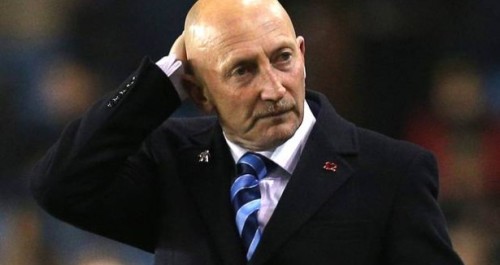 Where did I go wrong?

Ian Holloway‘s sacking by Millwall Football Club did not come as a great surprise to anyone who has witnessed – albeit from afar – the manager’s gradual disintegration as the season has worn on. Sad though this might also look at first sight, the parting of ways may well ultimately have a happy ending, with the man heading upwards into a more acceptable appointment – and the club plummeting downwards to nearer their natural level.

The season could hardly have started on a more positive note for Holloway or Millwall. The club had one of its two seasonal Cup Finals to look forward to as an opening fixture, with a chance to break out the Turkish flags and some really disgusting football shirts in order to mock the dead, as Leeds United – crisis torn and makeshift – rolled into town. The outcome was predictable on the field; less so off it. Millwall cruised to a routine 2-0 win over a Leeds team that hardly knew each other and played accordingly – and, as naturally happens in this neck of the woods, sections of the home crowd lost no opportunity to have endless fun over the murder of two Leeds fans 14 years previously.

After the game, and after giving due credit to his victorious troops, Ian Holloway was the very epitome of sportsmanship, making no attempt to gloss over the reprehensible behaviour of some Millwall fans and expressing his disgust at the nature of the chants and songs he had heard. It was a surprising but heart-warming departure from the normal “my club right or wrong” managerial line, and Holloway’s stock rose accordingly within the precincts of God’s Own County, as respect was duly accorded.

Wind forward a few months and now we’re heading towards the sharp end of the season. Millwall have declined steadily from their exhilarating start, and they’re in big trouble – and facing another Cup Final, this time at Elland Road. Leeds United have mounted a recovery of sorts, despite a mangled season of coaching staff upheaval and crises further up in the club as owner Massimo Cellino was hunted mercilessly by a pack of slavering Football League hounds.

After ending the August fixture at Millwall three points behind the Lions, United are now five points ahead, and the home game for Leeds is a genuine six-pointer. As ever with these fixtures, it’s what the fans call a “bubble match“. Away fan travel is strictly regulated under this tactic; the Millwall fans have to collect match tickets, exchanging pre-purchased vouchers for them at a service station in Yorkshire – the better for them to be kept an eye on in the hope that maybe they will not wreck any buses this time. For the past few seasons, this measure has kept the size of the ‘Wall away following down to tiny and inoffensive proportions – and so it would be today, something that would end up as an irritant thorn in manager Holloway’s tender hide.

This time, crucially, the honours went to Leeds, creating an eight point gulf between the two side that has grown steadily ever since. Leeds should, by the end of the season, be comfortably clear of the relegation zone – the gap is currently a luxurious 16 points – but it was this result that really started to relieve those nightmarish worries. Had Millwall won, Leeds would have been a scant two points ahead and the nerves would have been seriously twanging as squeaky bum time drew on. In the event, the Lions have signally failed to recover from that Elland Road defeat, currently sitting mired in the drop zone, a full eight points from safety. All quite satisfactory, and certainly a welcome change from the season opener – but how would Ian Holloway’s post-match performance compare to the heights he hit back then in sunny August?

The answer, as we all know is – not well. Not well at all. Depressingly, Holloway seized on the paucity of the Millwall away support, claiming that such restrictions made for an unfair atmosphere and that this had been a major factor in his side’s defeat. He didn’t appear to consider that no away ban was in place – that the Millwall fans had been at liberty to attend – if they could be bothered using the voucher and collect scheme. He didn’t reflect either that Leeds fans face similar sanctions at certain grounds, which doesn’t prevent them from being followed by thousands of fanatics everywhere they go. None of this penetrated Holloway’s head; he was looking for a scapegoat and he had the West Yorkshire Police in his sights, just ahead of pretty much everyone else.

Disastrously – a short while after Holloway had insisted that Millwall fans could be trusted and shouldn’t be subjected to “special measures”, so to speak – they showed their true colours with a typically disgraceful display of bad behaviour at Rotherham, in considerably greater numbers than they had mustered at Leeds. How Holloway must have wished he’d simply kept his mouth shut after the Elland Road defeat.

With the benefit of hindsight, the two games between Leeds and Millwall this season were each a barometer of the now former Lions manager’s standing at the time. As the season started, he had overseen a fairly miraculous escape from relegation the campaign before – and memories were still fresh of his impact on the Premier League as Blackpool manager a season or two earlier. He was eloquent in his post-match press call; there was a lot to admire in what he said – as I wrote at the time.

But as the Elland Road return rolled around, a different picture had emerged. Now Holloway was looking snatched and hunted; his team were embroiled in another relegation battle and, although they had snatched two unlikely wins in the previous two away games, their awful home form threatened to drag them down. Holloway arrived at the home of Leeds United desperately in need of another away win. He got nothing, and was unable to restrain his bitterness and frustration afterwards. His lack of class in seeking to blame matters on a body of men and women charged with keeping the peace in the presence of a notorious away crew did him no credit. The contrast between the Holloway defeated at Elland Road and the one so magnanimous in victory back in August was stark. This was now a man heading rapidly for the buffers, the brakes having failed.

Life, Leeds United, the Universe & Everything called upon Ian Holloway to apologise, after the Millwall disgrace at Rotherham, for the unwise things he’d said at Leeds about what have been shown to be sensible precautions over away travel for certain sets of fans. But there’s no pleasure in seeing a genuine character brought low – and I both hope and expect that Holloway will be back, in a better situation and also a better frame of mind. It seems likely as I write that interim Millwall manager Neil Harris has a bit too much on his hands to rescue the toothless Lions this time around. And, as any regular reader will know, this blog will shed no tears as and when they drop to League One. But nobody – no club – is all good or all bad, and to the decent Millwall fans, some of whom have contacted me with reasoned comments before now, I wish you well in what will probably be a season of League One consolidation next season. And I’m sure that Millwall, too, will be back.

It’s just that I hope, by then, Leeds are mixing it in the big league against appropriately big clubs. Nothing personal, chaps.