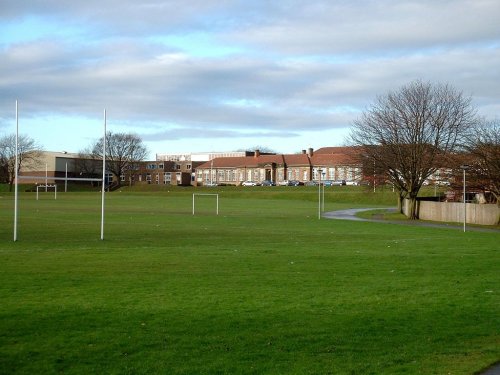 The Kings School, Pontefract – this blogger’s alma mater from 1972-78

For some reason, an inner voice is telling me it’s high time for a nostalgic trawl through some school memories. Mine take me back to the seventies, when I attended a school of mellow, weathered brick atop Mill Hill in Pontefract. For I was, in local parlance, a “Kings School Kipper” – and the teachers I met there were a mixed assortment of individuals, the like of which I suspect you do not encounter these days. It was in these years that my passion for Leeds United flowered and bloomed – sometimes I think it was my nascent love for football that saved me from despairing about the dusty and cheerless environment of a soon-to-be ex-grammar school. It was all boys, of course, no feminine distractions apart from some dragon-like dinner ladies with moustaches that outdid anything in the sixth form as well as most of the whiskery efforts among the hairier masters.

In order to protect the not-quite innocent, I’ll refer to the following erratic examples of the teacher’s art by their commonly-used nicknames. That should be enough for my contemporaries, those lucky enough to go through the KSP experience at around the same time. But, even without nicknames, many of the masters are recognisable by their individual quirks of personality. The teaching staff at Kings School were remote and forbidding figures for the most part, who used to prowl the corridors cloaked academically, like a horde of demented bats. They were as motley and weird a bunch as you’ll find outside the walls of Billy Bunter’s Greyfriars.

My own favourite remains the man with the unforgettable drawling delivery; a French master and perennial form teacher known to us all as “Jack”, because his surname rhymed with that of the bandleader Jack Parnell. Jack was notorious for a series of stock phrases delivered in a characteristic nasal drawl. We’d dread the sound of “Get a move on, get some work done!”, or the doom-laden “Right, lad; fifty lines.” Jack was fanatical about his Chess Club and also his support for the gruelling coast-to-coast Lyke Wake Walk. His finest hour, for me, came when he was delivering sentence on a classmate with the surname Grace. Jack’s nickname for him was “Amazin’”, and when Grace annoyed him this one time, Jack came out with “Right lad. Fifty times in French, backwards: it’s amazin’ what raisins can do”. As the youngsters are wont to say: how random is that?

There was another Jack too, a scary character in the maths department, whose party-trick was to make his voice grow deceptively gentle, lulling a drowsy class off to sleep. Then, when he could see heads nodding, he’d give the blackboard an almighty clout with a board ruler, making a sound they must have heard down at Carleton Secondary Boys’ School. The shock effect of this ensured our wakeful attention and our sadistic teacher was plainly delighted each time he thus traumatised us.

Among the many other odd characters on the staff, there was a music teacher commonly referred to as “Tramp”, for his lack of sartorial elegance; an English master known for some obscure reason as “Bungee” – and a fearsome character whom we dubbed “Chopper”, for the swinging axe-like nature of his disciplinary methods. When another, younger teacher of the same surname joined the staff, he was immediately christened “Chipper”, in a neat tribute to a couple of popular Raleigh bikes of the day. Another English master was a man of rotund aspect, who spoke with an accent straight out of Golders Green, and was also an enthusiastic spare-time football coach. One day, an inspired member of our form looked out of the window and saw “Fat Ron” wheezing up and down as he reffed a game on the pitch just in front of the main building. “Oh look, sir,” he piped up. “There’s a heavy dew on the grass”. It took a moment only to catch his double meaning, and then the lesson dissolved into fairly malicious but honestly not anti-Semitic laughter. As a memorable bon mot, this one passed straight into Kings School legend and was much admired for years afterwards. I remember it more fondly than perhaps I should, as it was “Fat Ron”, the interfering git, who later grassed me up for being an underage member of a local club where I’d often pleasantly wasted time drinking lager and playing snooker or pool.

In the science department, we had a tall, thin physics master of amiable disposition who, although afflicted with a speech impediment, was often called upon to read the lesson in assembly. This seemed harsh enough, but the cruelty of us boys went a stage further; we called the poor bloke “Splut”, often to his face. Then there was another physics teacher, of Lancastrian origin, known as “Mad Brad”. He used to say to me, “Atkinson lad, this homework is di-A-bolical” (as it invariably was). His colleague in the chemistry lab, nicknamed Taff in tribute to his origins in the valleys, would doubtless have agreed – when he wasn’t lifting us by our sideburns, that is, to an anguished protest of “Sir, sir, sir, gerroff, it kills!” And don’t even get me started on the nasty little punishment habits of the games masters…

Given the suffering occasionally inflicted upon us by these out-dated brutes, it’s surprising how almost-fondly I now look back on my time as a Kipper. Distance lends enchantment, of course, to those dear old golden rule days – but my only truly positive memories are of the jam roly-poly in the dinner hall and playing football with a tennis ball on the basketball court. Most of us were Leeds fans, but there were a few renegade scummers and one lad who insisted on supporting Arsenal or Derby for no apparent reason. The teachers, meanwhile, were diverse in their football affiliations. One of the English masters was a Burnley fan who I remember engaged me in a serious discussion about the pros and cons of Ray Hankin – and there was a Coventry fan in the Sports department whose chief disciplinary trick was to hand out impositions of ten lines at a time – trouble was, the lines were about three pages long. I honestly can’t recall any Leeds-supporting teachers; perhaps life would have been more pleasant for some of us, if there had just been that little bit of common ground.

It strikes me that there must be readers of this blog out there who were Kings School Kippers, just as I was in the seventies. Please feel free to share your memories of the place and its barmy inhabitants – I’d be really interested to read the recollections of others who went through that particular institution and emerged more or less unscathed. Or just recount your own school memories – all contributions welcome subject to the usual moderation…