Will the Real Steve Evans Please Stand Up?   –   by Rob Atkinson

So, who have we got coaching the Leeds United first team now? If it’s the gentleman in the picture above, then it’d be hard to think of an incoming United manager giving a better example of getting off on the wrong foot since a certain Brian Clough breezed into Elland Road, slagging off all and sundry. 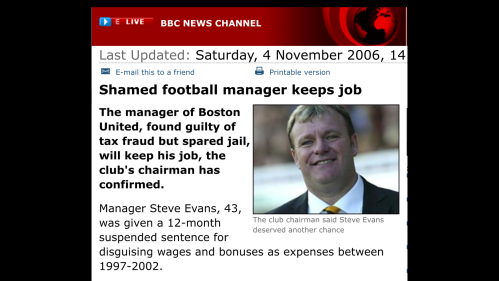 Then again, if it’s the convicted tax fraudster in this second picture, then we can expect the new occupant of the Leeds hot seat to get on quite well with our straight-as-a-corkscrew owner Cellino. A fellow feeling makes us wondrous kind, as old Will Shakespeare said, a few years back. Kindred spirits, and all that.

This blog thinks that Mr. Evans will have his work cut out building any sort of relationship with the notoriously stroppy Leeds support. He might have his work cut out with a bewildered United squad, too. Then again, those tasks might just turn out to be chickenfeed, compared to figuring out how to stay on the right side of Cellino.

Some say of Evans, give him a chance. Others are more inclined to give him the cold shoulder.

Me? I’ll give him till Christmas, tops.

13 responses to “Will the Real Steve Evans Please Stand Up?   –   by Rob Atkinson”