Crazy Boss for a Crazy Club. Leeds and Bielsa, a Match Made in Heaven… or Hell – by Rob Atkinson 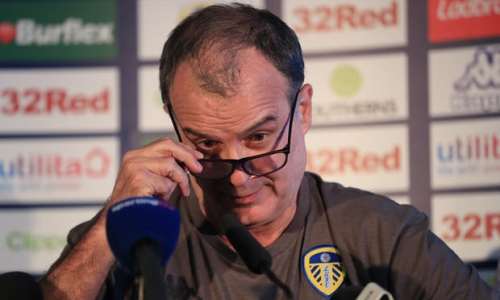 The Marcelo Bielsa era at Leeds United has officially begun, with the man they call “el Loco” – the Madman – holding his inaugural press conference at Elland Road on Monday. Despite a reputation for lengthy press sessions, this was a brisk hour and twenty two minutes, with much of it taken up by the translation process. During that time, we all learned a fair bit about the new United boss. There were questions, answers, a few laughs and no grenades.

One thing that stood out was that, despite his evident dislike of false modesty, Bielsa is not short of humility. He batted back questions about Pep Guardiola regarding him as the best coach in the world, by hanging that accolade firmly around the Manchester City boss’s own neck. The overall picture was of a man who would not be settling for sound bites or stereotypes – a man indeed with his own philosophy and the determination to see that imprinted on his new situation.

When it came to brass tacks, the Argentinean revealed that he thought the Leeds United squad was top-heavy by maybe 15 players, whilst acknowledging that it needed strengthening in four or five areas. Although he stated that there wouldn’t be too many players coming in, and that he saw the youth element at the club as being a potentially useful resource, it still seems likely that there will be some significant player turnover in the near future – with outgoing players making up the bulk of that.

Overall, Bielsa’s debut day went well, and seemed to be well-received, certainly on social media. For this, we must thank the affable and efficient translator, who managed to convey not just the text of Marcelo’s utterances, but also nuance, light and shade. There was even some eye contact from Bielsa, a man notoriously not given to that – and, more remarkably still, the odd smile.

The only potential gaffe came when Bielsa was asked whether he preferred Don Revie or Brian Clough, and delivered a brief homily on his football philosophy, stating “In terms of winning the right way, I prefer to lose rather than cheat or play tricks. I prefer beautiful football rather than over-pragmatic football. Playing well brings you closer to winning things. I don’t think we can claim that playing badly is a way that achieves victory.”

That’s all well and good, but anyone working for the United cause needs to be wary of straying into heresy; sections of the press are all too ready to pounce gleefully on any apparent endorsement of the old myth that Cloughy was all good and the Don all bad. Perhaps a little while spent around LS11 will lead to a reassessment in this particular area. It was a distinctly left-field question, though and, so far, at least, nobody seems to be holding Bielsa’s slightly equivocal response against him.

If anything, this one uncertain moment summed up the abiding sense that here is an appointment that could as easily go extraordinarily wrong as it could sublimely right. In the here and now, nobody can predict which of those two extremes is the more likely – people are just settling for the near certainty that it won’t be anything in between. This union of crazy club with crazy man could indeed be a match made in heaven – or hell.

For the moment, then, it’s full ahead for the good ship Leeds with Captain Bielsa at the helm. May fair winds and calm waters see him safe to the destination we all wish so fervently to reach, there to prosper and maybe find some silver. The mission is clear, the rewards are great. And, while the voyage may be long or short, what we can most definitely predict is that it’s highly unlikely to be boring.

9 responses to “Crazy Boss for a Crazy Club. Leeds and Bielsa, a Match Made in Heaven… or Hell – by Rob Atkinson”