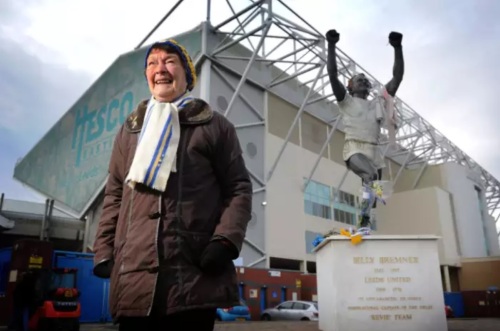 Whenever I hear the word “superfan”, I usually think of Gary Edwards, the Kippax painter, author, playwright and all-round good guy who has famously not missed a Leeds game for more moons than most of us would care to count. I was lucky enough to sit a couple of seats away from Gary on the Kop for a few seasons, and I was in awe of his longevity and dedication, as well as his legendary hatred of man u, the Pride of Devon, which complicated his life as a painter to the extent that he’d refuse to paint anything red, but would strip red paint for free.

Gary’s out on his own in many ways, but today I learned of another United superfan who, for sheer length of service, puts even Mr Edwards in the shade. Unfortunately, the reason that I became aware of Edna Newton is that she has sadly passed away this week at the grand old age of 94. Having accumulated that many years, Edna has probably earned her long, last rest – but it does seem a great shame that she won’t be around to witness the long overdue return of her beloved Leeds to the top flight.

Still, as a season ticket holder for 64 consecutive years, Edna had seen it all, and doubtless had many tales to tell of John Charles (I knew John, she said, he was a smashing fellow), the Don Revie era and much more from the chequered history of the Greatest Club in the World. Her achievement was such that even a legend of the stature of ex-Arsenal striker Ian Wright took time out to tweet “Rest In Peace Edna”, which is a pretty nice touch.

Fans are probably still the least appreciated part of a game that would not be half the spectacle without them – yet, every now and again, sheer loyalty and devotion above and beyond the call of duty, over literally decades, will be recognised and acknowledged. Such is the case with the late Edna Newton, and deservedly so. She stands comparison with any other Leeds fan and has her own place in the pantheon of United legends.