Could Glenn Hoddle be the Man for Leeds United? – by Rob Atkinson 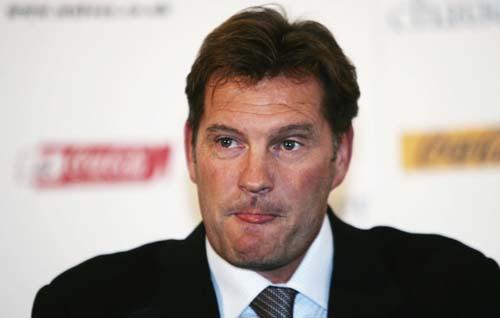 These are confusing times – even distressing, perhaps – for Leeds United fans.  Results have been poor of late, to say the least.  We have arrived at a point where, after deeply humiliating defeats at Rochdale and Sheffield Wendies, a late and narrow loss to league leaders Leicester has been hailed in some quarters as a triumph of sorts, restoring some pride if not yet belief.  The display against the Foxes was certainly much-improved – but when the best source of comfort and encouragement is a defeat cherished for its battling qualities and narrow margin, then you know that expectations have sunk to an unacceptable low for a club with the history and tradition of Leeds United.

It’s not as if all the misery is on the park, either.  TOMA II is starting to assume the epic proportions of its humongous forebear, TOMA I – echoing swathes of silence are punctuated with a few hollow-sounding reassurances about dots and crosses for neglected letters of the alphabet, but the days drag by and nothing of note has happened, other than the club’s 999th and 1000th loan signings of this depressing century – or at least, that’s how it feels.  This current transfer window, just like the several preceding it, was talked-up as THE window in which we’d be flexing those big-club muscles and getting that squad strengthened as we’ve all known for ages it needs to be.  As January wanes towards February, it’s starting to feel like the old, old story – but we’re still being promised good news, so you never really know.  It’s just that it always seems the same at Leeds United – there’ll be pie in the sky, by and by.  Yet it always seems to turn out to be humble pie, and we’ve swallowed plenty of that this past decade or so.

It wouldn’t be Leeds United, either, if there were no speculation over the manager’s position – even though our Brian hasn’t been in that uncomfortably perilous hot-seat for a twelvemonth yet.  This blog is on record as stressing it’s firmly behind Mr McDermott, steadfast in the belief that all the guy needs is time and backing of the munificent fiscal variety (we’ve had all the platitudes, thanks).  But with TOMA II dragging on, and on, and on – pending approval from some higher authority that seems determined to sit on its arse and prevaricate until our transfer options have disappeared completely – what real chance does BMcD have to get things sorted as he doubtless wishes to do?  Instead, he’s reduced to the soundbites we’ve heard before from other managers – McAllister, Grayson, Warnock – whose one common factor is that they’ve all ended up sacked.

There are conflicting messages emanating from the United support where Brian’s own prospects are concerned.  A vociferous if less than convincing minority seem to want him gone, and will argue that the recent run of results is sufficiently bad to have seen most men out of the Elland Road revolving door.  What I see as wiser counsel argues for patience, continuity, stability – basically to write this season off in terms of promotion ambitions, get the takeover sorted – and then attack the squad re-shaping job in the summer.  Because surely, one day we’ll have a transfer window that doesn’t end up as a bleak disappointment?  Even last summer’s was no great shakes, the major high points being the signing of Luke Murphy (ahem) – and the getting-rid of Ken Bates. 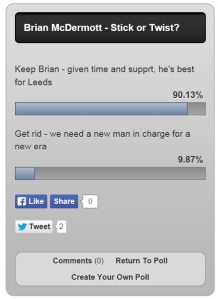 I ran a poll a few days back, and it’s evident already, as can be seen from the illustration here, that the vast majority of the contributors to that, when asked the straightforward question of “Keep Brian or get rid?”, are opting for the stability and security option.  A massive 90% want to hang on to Brian, dwarfing the measly 10% who would have a change less than a year after appointing him.  If this is representative of the support as a whole, then the owners – whoever they are – should feel secure enough in their choice to keep their faith in McDermott.  But it’s notoriously the case that patience runs short very quickly in football and that, especially when new owners come in, they frequently bring with them a new broom to sweep clean.

All of which laborious preamble brings me to the point of this article.  Remember – I support Brian, I think he deserves time and backing to do the job he so clearly and passionately wants to do.  But if the powers that be DID decide to get rid, then I feel it would be time to think big in an effort to restore some faith in the way the club is being run.  I watched the Chelsea v Man U match the other day and a studio guest was one Glenn Hoddle.  I have to say, I was impressed by his evident deep knowledge and understanding of the game as he dissected the mistakes the Man U defence had made.  His is an impressive CV blotted by one unfortunate episode of nuttiness.  A little nuttiness is surely not a factor that should debar any candidate from the Leeds job – we’ve had Clough and Warnock in the past, and I’ve even heard some call for di Canio.   And deep down, if the worst came to the worst, I just feel that Glenn Hoddle might be the man for Leeds – and Leeds might just be the challenge to tempt back a high-class coach who is still young enough to make a renewed mark on the game.

Madness?  Perhaps.  Remember please, my first option is to keep Brian McDermott.  But IF he’s dismissed – and history tells us that for any manager the sack is just a few crap results away – then why not Hoddle?  Wouldn’t we enjoy his style of football?  Might he not be the man to reinvent Leeds as a classy footballing machine motoring back towards the top?  What do people think?  I await your opinions, however derisive, with interest.

67 responses to “Could Glenn Hoddle be the Man for Leeds United? – by Rob Atkinson”