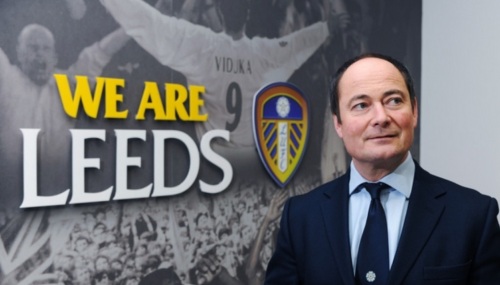 If you’re a Leeds fan – and if you’re not, why are you even reading this??* – then you’ll be familiar with the concept of “glass-half-empty”. It’s something that pervades such a lot of the Leeds United-related talk everywhere these days, both on and offline. You sometimes get the feeling that any good news is ever so slightly unwelcome – deemed to be in bad taste by the sobersides pessimists that make up a bleak but significant proportion of the club’s support.

Twitter is an obvious example of this in the virtual Leeds world. There’s some right miserable buggers on there. It’s certainly not recommended for those United fans already of a nervous or depressive persuasion – it’d be set fair to finish them off. An evening perusing the #LUFC hashtag would be a mighty fine cure, too, for anybody reeling from an overdose of nitrous oxide (that’s laughing gas, for any Lancastrians who might be reading this). Even the cheerful Leeds fan, that rarest of creatures, doesn’t emerge from a session on Twitter unscathed, with any joy in his heart.

So your average Leeds fanatic doesn’t have to look far to find someone or something depressing in connection with the Whites. Bad news and sombre outlooks tend to wait around every corner, lurking there to pounce and enfold you in their miserable but vice-like embrace. The resultant gloom and despair tends to seep into your soul over time, like a thin but persistently damp fog will into consumptive lungs, rendering all but the most resiliently cheerful breathless with misery – asking of themselves what they’ve done to deserve being stuck with such a very depressing club to follow. And there’s nowt you can do about it; you just have to grimace and bear it, hoping against hope for a ray of sunshine in that ugly miasma of negativity.

All of which is why Andrew Umbers, Deputy Sheriff of Leeds United and lately promoted to the top job since a Football League posse rode in to take President Cellino temporarily away, is such a welcome breath of fresh air. With his sunny reassurances and breezy optimism over the future, both long and short term, Mr Umbers is positively manna for the soul. Try this for size: it seems he expects Leeds to be FFP (Financial Fair Play) compliant and out of embargo by the time the summer transfer window opens. What – really?

“Yes. We’ve submitted our FFP analysis. We’re already planning for what we need to do squad-wise for the 2015-16 season.” Wow. How good does that sound? The long faces and short tempers on Twitter had been predicting that this current transfer embargo will be around longer than Cellino will. Some people certainly seem to relish wallowing around in misery, don’t they? Not me. I’m only happy when I’m happy – and that one isolated quote from the rather lovely Mr Umbers has really cheered me up no end.

It’s received wisdom that any 50 year old Yorkshireman will normally be quite direct, not exactly shooting from the lip, perhaps, but not fannying around with smoke and mirrors either. Umbers does tend to tread quite daintily around his involvement with, and take on, previous administrations at Elland Road – but with his focus very much on the future and making the current set-up work, that is both understandable and forgiveable.

Nevertheless, the temporary Chairman’s appraisal of what has happened at Leeds over the past few years – seemingly, to the outsider, a succession of car crashes leaving blood and wreckage everywhere – is as upbeat as you could possibly expect. He refers to the initial scary impression at the time Cellino bought his controlling interest – the advice then was to scream and head for the hills, or at least call in the administrators – but he insists that the subsequent “root and branch strategic review” left the new incumbents defiantly unwilling to contemplate administration. Now, he says, the situation has “dramatically improved” – so much so that he feels confident about his prediction that Leeds will emerge from embargo this summer – and that a break-even position is attainable by the end of next season.

Breaking even, of course, is achievable via many and varied routes – there is more than one way to skin a cat, after all. Leeds broke even sometimes under Bates, but that was achieved largely through the deeply unpopular sale of prime assets – like footballers of immense potential and great skill. But Umbers has not emerged as a fan of selling some of the young diamonds coming through the ranks at Leeds, and that is at least as reassuring to the long-suffering fans of Leeds as anything he might say about balance sheets, lifted embargoes or pounds and pence. So the talk is of financial restructuring, rather than fire sales – more positivity for a body of support to digest, who have previously grubbed around on the barren ground of austerity and depression. It would be easy to get used to this.

Umbers’ tenure as the nominal head honcho is distinctly finite, at least this time around. He appears to be in for the long haul, though, speaking enthusiastically of building a new training ground, reacquiring the stadium (yes, that again) – and re-engaging with the community. “We have massively interesting developments that we’re working with the council on,” he offers, adding as a cliff-hanger, “More about that next month”. Wrapping up a distinctly glass-half-full briefing, he refers to the club being in a comfortable cash-in-bank position – and again, skirting neatly around less pleasant matters, he gives his opinion that relegation, whilst it would have severe consequences, wouldn’t be fatal. “This club would still be around”.

Relegation, administration – or any other of those nasty words to be found in such proliferation on Twitter – do not appear to be at the forefront of Andrew Umbers’ global view of the Leeds situation. He looks forward to the remaining 60 or 70 days of his stewardship with a smile on his face. “It’s a privilege,” he says. “We’re going to put in the hard yards and make the club viable.”

You get the feeling, the distinctly positive impression, that Mr Umbers means what he says and is confident – little by little, bit by bit – of delivering a two year recovery that will silence the gloom and doom merchants. And at Leeds United, of all clubs – where moaning and groaning was de rigueur even at the summit of the Premier League – that would, in itself, be no mean feat.