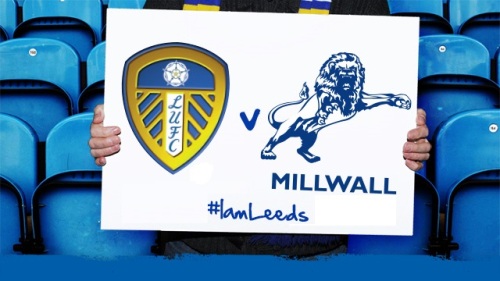 Had it not been for Millwall’s last two performances away from home, when they have recorded successive 1-0 wins at Notts Forest and at Birmingham, Leeds United might by now be breathing easy – and thinking more of the Championship top half than that worryingly close relegation battle.

The truth of the matter is, it’s only Millwall of the bottom three clubs that are close enough really to worry the Whites, and that’s only because of those six points extorted out of their last two road trips. If they were to complete a hat-trick of away wins in LS11, it would be more than unacceptably embarrassing – it would put our whole season right back into the melting pot, just when we need to be stretching away from the unseemly brawl at the bottom.

Looking at the current league table, there are pesky little Millwall, neck and neck with Brighton as they compete for the honour of not being that third relegated club. As it stands, Blackpool look dead, while Wigan are on the floor and seem to be breathing their last. Those two are a full ten and eight points respectively behind our friends from Bermondsey.

If Millwall had done the decent thing, and had rolled over at Forest and Brum, they would now be making up a neat little relegation trio with the two Lancastrian dead men walking – all of them clustered cosily together on the gallows, all nicely two points apart from each other; and the nearest to us would be a distant eleven points away. Then again, if my auntie had balls she’d be my uncle, wouldn’t she – but Birmingham had been doing so well until lately, and Forest have just slapped Wigan 3-0. Surely, it was not unreasonable to expect Millwall to lose those two. But no, they ignorantly got two unlikely wins, so what should be a comfortable gulf between us is instead a dicey-looking 5 points – though we do have four other clubs between us, as insulation if you like.

All of this means one thing: Leeds must beat Millwall at Elland Road on Saturday. For once, it is nearly as much our cup final as it is for those envious docklands pariahs with their scummy, inbred fans. Not that the away support will be anything to worry about – a few dozen cold and shivering die-hards are expected to negotiate the security curtain in order to attend. That’s all plucky Millwall bring these days. Not that they’re scared, of course.

So the away support won’t add much to the atmosphere, and it’ll be down to the White army to back their heroes or have the game played in a sterile vacuum. Either way, no slip-ups can be tolerated. The last home performance, as well as the showing of that appalling ref, must be forgotten. We have to draw on the positives of the Reading game (and Huddersfield – yes, we’re on an away hat-trick too) and we have to win. Simple as that. Easier said than done, of course. Millwall will fight like the dockland rats they are.

But the prize for Leeds is enticing – an eight point cushion from that dreaded trapdoor. If we were to lose – horror of horrors – it could be down to as little as two points, and that’s when bums start to squeak. Besides which – I don’t want my email inbox clogged with triumphal if illiterate outpourings from my fans down Millwall way. It’d be irksome in the extreme.

One change at least will be enforced on Leeds as Tommaso Bianchi awaits an operation to repair a cruciate ligament injury. It’s never particularly edifying, trawling through the musings of some of the Leeds United Twatterati, but much of the output in the wake of Reading was horrifyingly unimpressive, as several morons so far forgot themselves as to actually celebrate a United player’s serious injury. That’s simply unacceptable; some people need to take a serious look at themselves.

In another area of the team, Redders is backing “unlucky” Steve Morison to end his goal drought and, really, the law of averages if nothing else would seem to be in favour of the coach having a point. The striker’s hard work and application, the way he has led the line, means that his value to the team can be measured other than in terms of goal output (thankfully). But he’s also struck the woodwork on a couple of occasions and has been denied by some decent goalkeeping too. So there has been a bit of bad luck dogging him – and there’d be no better time to bag a couple than against one of his old employers on Saturday.

Life, Leeds United, the Universe & Everything was feeling quite confident after a spot-on prediction for the Huddersfield game. That breezy smugness evaporated after we caught a cold against Brentford, when a 3-1 victory had been politely requested. We kept schtum for Reading, and got our reward. But this is a must win game, so I’m going to direct the jury to find for the home team, to the optimistic tune of 3-0. That would do very nicely indeed, and would also – I suspect – keep my email inbox troglodyte-free for the foreseeable future.

The nil part of the prediction is inspired by the massively reassuring presence of a certain Sol Bamba in the back line. That’s asking for trouble, I know. As for the three goals predicted for Leeds – well, you never know. Luke Murphy seems to have developed a knack for scoring and creating during his recent renaissance. We do have some potential going forward, again partly due to the increased sense of security at the back. So, a solid display against Millwall, plenty of endeavour and hard work, and maybe the odd flash of inspiration too.

And if Mr. Morison could come up with a brace or a hat-trick then, let’s face it, we’d all be extremely happy. Apart, perhaps, from those who’d been looking forward to another good old whinge on Twitter. And who gives a toss what they think?