Posh Patrick Has Become Paddy the Baddy, and Leeds Fans Just Love It – by Rob Atkinson 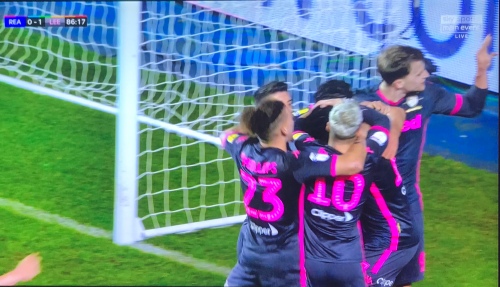 Paddy the Baddy advising angry Reading fans to pipe down

There may well still be a small section of Leeds United fans who don’t quite “get” Patrick Bamford, although they’ve been noticeably quieter of late – as the majority of Whites fans seem finally to have cottoned on to our number nine’s value to the team. But there’s mounting evidence to suggest that Mr. Bamford certainly does “get” Leeds United, football’s perennial pantomime villains and the club opposing fans just love to hate. Bamford seems to have bought into United’s “the world’s against us and they can get stuffed” mindset, and just lately he’s been feeding off that siege mentality vibe, fanning the flames of opposition hate, thriving on all of that negative energy. It’s been a joy to witness for any Leeds fan who glories in that old maxim “Our history makes us strong, your hatred makes us stronger still”.

Perhaps Bamford’s more defiant and in your face attitude has its roots in his much tougher and more durable physicality this season. He seems to have developed a core of steel, giving as good as he takes in terms of the rough stuff while still retaining his cultured approach and all round ability. Bamford is certainly no soft touch nowadays, and his opponents will know they’ve been in a game after the ninety minute nightmare of trying to cope with his relentless work rate and intelligent movement. But, although this factor is appreciated by the more knowledgeable Leeds fans, it’s that extra edge, that emerging nasty streak and accompanying tendency to rub the noses of opposing players and fans well and truly in it, that has really caught the eye of his admirers this season. Football fans have a word for this phenomenon, but it’s not one that I’d want to use in a family-friendly blog, so I’ll move swiftly on.

But, whatever you want to call it, it’s certainly working wonders for Bamford, in terms of his effectiveness on the field as well as the esteem in which he’s held off it. Recent manifestations of Paddy the Baddy have been sighted at Luton and at Reading, where he has made a point of winding up frustrated home fans after United’s winning goals. Add this to his heartwarming tendency to give direct opponents a physically difficult battle, and you’ve got the kind of striker that will always find a place in Leeds United fans’ affections. Bamford himself admitted recently that he’s “feeling the love” from the fans, a happy situation for a hard-working and committed striker who doesn’t always get the breaks his application and skill deserve in the attacking third of the pitch.

The thing is, even when all this effort fails to reap a goals dividend, it’s becoming clear that Bamford’s contribution is vital to United’s season. On Tuesday night, right at the end of a hard-fought win over Hull City, we saw a neat demonstration of how our Patrick puts in a shift for the team, and is not discouraged when luck is not with him in terms of goals – which, let’s face it, are the life-blood of any striker. And it was somebody else’s match-clinching goal after 86 minutes on Tuesday that summed up the Bamford effect, as he combined with keeper Kiko Casilla to scramble clear a goal-bound effort from a Hull corner. The ball was immediately played upfield, and Bamford put in a lung-bursting run to the opposite penalty area to thud a shot against the visitors’ post. Luckless again, but his narrow miss rebounded to Gjanni Alioski, who buried the chance from a narrow angle to end the Tigers’ resistance.

And that, my fellow Leeds United fans, is the Bamford effect in a nutshell, and long may it continue to manifest itself to our advantage. Because, whether it’s Posh Patrick or Paddy the Baddy we’d rather cheer from the stands, both will have a big part to play if we really are finally going to go up to the Premier League.

12 responses to “Posh Patrick Has Become Paddy the Baddy, and Leeds Fans Just Love It – by Rob Atkinson”