As a long-suffering Leeds fan, I’ve learned to temper my expectations and to live with disappointment for the vast majority of the time.  Such is the lot of most genuine football fans, only the plastic glory-hunters can expect much better – and even they will eventually experience hard times, as the fate of Man U this season is comically proving.  So my wishes tend to be few and simple, and right now they can be distilled down to three major desires I’d love to see fulfilled over the next couple of months.

For once, none of these revolve around disease, pestilence or other misfortunes for those lovely people at the Theatre of Hollow Myths.  The poor old Pride of Devon are having a horrible season and the red quarter of Manchester has had to suffer anew today, watching the city’s premier club walk off with the season’s first silverware.  I wish bad cess to them, as ever, but they seem to be screwing up all on their own at the moment, so I can devote my wishes elsewhere in the knowledge that the Evil Empire is crumbling of its own accord – I’ll just offer up a small prayer for Mr Moyes, who is doing such a fantastic job over there on t’wrong side of t’Hills.

My wishes then, are as follows:

The granting of these three wishes will do me for now – but inevitably they would lead on to more wishes of an increasingly ambitious and extravagant nature.  This is only to be expected – Leeds have been poor relations for far too long, and it’s high time we had some seriously good things to look forward to. So: whoever’s in charge of these things – please take note.  Sort out these three small wishes for me, and stand by for further communications in the near future.

Home For Rent- Note The Preferences

This is MY local authority – Labour-controlled -joining in the ConDem policy of marginalising the poor, the jobless, the sick, the hopeless. Horrible.

This should go viral. Thinking it in your head is one thing, but writing it out loud is quite another, especially in the UK in the 21st century.

Thanks to reader Kim Cross. 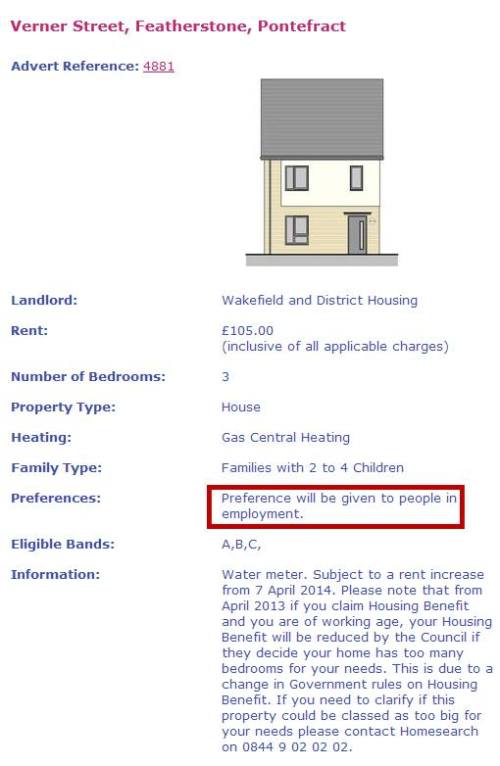 Pardew drops the nut as Howard Webb looks on

It’s rather an article of faith for Leeds United fans – some might even call it a tell-tale symptom of paranoia – to seize upon notable examples of bad behaviour by those at other clubs, wondering out loud: how would the authorities react if it had been us doing something like that?

The weekend incident when Newcastle manager Alan Pardew committed what amounted to common assault on an opposition player was a case in point. Just imagine if, say, Don Revie had upped and nutted Emlyn Hughes for example, or perhaps even an establishment darling like Bobby Charlton. The likes of Alan Hardaker would doubtless have demanded the death penalty, and our own Sir Don might well have ended up dangling from a lamp-post on Lancaster Gate.

Petulance and over-aggression, under the pitiless gaze of the omnipresent TV cameras, are becoming more and more of a problem on the football field. But in Saturday’s meeting of Hull City and Newcastle United, the issue reared its ugly head, so to speak, in the managerial technical area. With very little provocation – and somewhat less thought – Toon manager Alan Pardew acted like an inveterate thug, utterly disgracing himself and, by association, his club.

The circumstances were bizarre. No excuses could be made in terms of pressure or stress, no mitigation is available by way of any sense of injustice or bad luck. Rather, if anything, the opposite. Pardew’s Newcastle team were 3-1 up, having landed a hat-trick of sucker punches while Hull City had battered away at the Geordies’ goal to no avail. Then, City midfielder David Meyler, hastening to retrieve the ball for a throw-in, had the temerity to jostle Pardew in passing. Was this at the root of what followed? Did Pardew feel that his immense managerial dignity had been ruffled in his being brushed aside by a mere Hull City player?

Whatever the cause, Pardew reacted like a teenage hoodlum with twelve pints of White Lightning inside him. Facing up to a startled Meyler, the irate manager – there is no other way to describe this – butted his hapless target in the face. He “dropped the nut”, as we say hereabouts. Stitch that! He inflicted a “Pontefract Kiss”, which involves forehead but no lips and is decidedly not an expression of affection. The TV commentators yowled in shock and disgust. The pundits on Sky’s Soccer Saturday programme giggled, as is their wont, in delighted schoolboy amazement, tinged with an awful sense of what the headmasters at the FA might now do.

Let’s not be coy here – this was no ritualistic “shoving of a player’s head in the general direction of equally riled-up opponent”. You sometimes do get that between opposing players, and it’s usually more like two wary stags trying to show aggression without getting hurt, than any real intent to land a blow. Pardew’s offence was different. It was a full-on, neck flexed, calculated nutting, aimed at a player who clearly expected nothing of the sort from a Premier League manager. As Pardew’s forehead landed, the football world shook.

It’s been said quite a few times since the incident that such behaviour from a manager is unprecedented.  Yet Pardew does have form for touchline aggression, having been caught on camera in the past, going full throttle for the distinguished throat of Arsene Wenger.  This most recent descent of the red mist over Pardew’s vision is baffling, mainly for the relative lack of provocation in what was a fairly comfortable situation for his team – but also for the sheer lunatic foolhardiness of the act.  This is a man, let’s not forget,  who needs to be able to demonstrate the temperament and emotional stability to have charge of a squad of highly-paid athletes in the white-hot atmosphere of Premier League combat.  Pardew has demonstrated beyond reasonable doubt that he lacks these qualities and you have to fear for his future, if not his sanity.

This is surely a situation where the game’s authorities have to act, and act decisively.  They really are honour-bound to throw the book at Pardew if they are to send a sufficiently emphatic message to the effect that this sort of thing is simply unacceptable.  Newcastle United themselves have attempted to defuse any action by the game’s rulers, imposing a heavy club fine and issuing an official warning.  But really, the man’s credibility is shot – surely Newcastle cannot afford to be tainted by association with such a liability.  The Toon fans of my acquaintance would not mourn his departure, and it may well be that a quality squad would benefit from a wiser, calmer head in charge of their team.

If Pardew now stays in charge of what is a significant if not huge Premier League club, then what sort of message does that send out to everybody involved with football – the players, managers, fans – everyone?  What does it teach the young kids who watch football avidly on TV and will have seen Pardew’s nut-job in full HD and glorious slo-mo?  Nothing of any good, that’s for certain.

The FA should act, and they should act swiftly.  We are given to understand that they will investigate the matter – and of course they have no power to dismiss Newcastle’s manager; that is a club decision.  But by imposing a touchline ban of significant length, the FA could perhaps force Newcastle United’s hand, compelling them to realise that hanging on to Alan Pardew is in nobody’s interests – probably not even his own, given the pressure he will now be under every time Newcastle play.

I’d find it very hard to defend a Leeds United manager in these circumstances – though I probably would try.  That’s where blinkered loyalty leads you.  It’s more than likely that some Newcastle fans will be minded to defend Pardew. But he’s made a fool of himself and it reflects no credit on Newcastle United FC that he’s still in post a full day after his ridiculous and foolhardy action.  A parting of the ways would probably be in the best interests of everyone concerned, and after the events at the KC Stadium on Saturday, it can hardly come soon enough.